Obviously, the full title should have been: “5 reasons why Germans can’t make money, #2 of which you would have never thought could be real”. But seriously, this should be interesting.

Now let me tell you how come and what the specific problem is.

See, I’m German, but for the last couple of years, I have spent less and less time in Germany due to being a Hobo CEO. I am also speaking, reading, writing, … well, 95 % of my media consumption, it’s all in English. Combine that with the fact that I’m socializing with other entrepreneurs, I actually do often think and talk about making money.
The problem is, in English mode I can, but as German, I simply can’t. It doesn’t work.

You folks living in or coming from the Anglosphere can make money. And not only that, you can also make sense, or breakfast, or something work. Good for you.

But we Germans simply can’t do that; except the part about making sense which somehow managed to slip into colloquial language, mostly used for the negative as in “es macht keinen Sinn” (it makes no sense).

Back to making money. We don’t do it that way. When you’re German, you “deserve money” (Geld verdienen). Now you know that sounds wrong to a native English speaker. For one, “to deserve” is very passive. You would certainly rather say “earn money” which is the correct translation, of course. But in German we can’t even “earn” money. We don’t have a word for that either. In our language “to earn” and “to deserve” are both one and the same word, “verdienen”, which is way closer to “deserve” because the second part of the word “-dienen” is verbatim “serve”.

That’s why in German you can say, “You earn what you deserve” and it’s more poetic because you get this ambiguity by using the same word twice, “Du verdienst, was du verdienst.”

Here’s some proof of this whole mess for you Anglospherians from LEO. 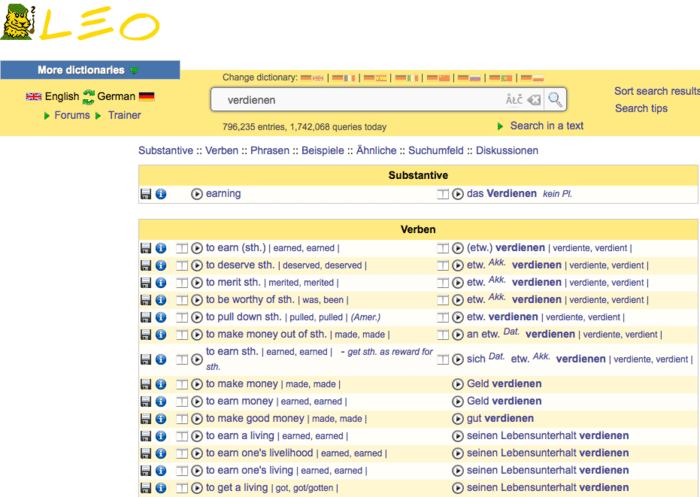 As you can see, no matter whether you want to earn something, deserve something, be worthy of something, or, make money, you end up having to use “verdienen”.

I know this sounds ridiculous. I fear, it is not just a little language oddity. Just consider all the Germans that do not speak or are able to think in English.

But wait, little update from a dear reader: There is more German misery here. Mr. Christian Höferle @Hoeferle came across this article and very fittingly remarked that I could add the following, as it also relates to money and our relationship to it via language:

The word for “debt”, sort of the opposite of making money, in German is “Schulden”. And while in English you can even manage to straight “run into debt” (sounds like really going for it, if you ask me), we can actually “make debt” (Schulden machen) in Germany.

But the kicker is that the word for “guilt” is “Schuld”. So “mea culpa”, “my bad/fault” or “I’m guilty”, is “meine Schuld”, meaning the word for debt and for guilt have the same word stem, “Schuld”. Basically, in German, debt is simply the plural of guilt! So when Germans have debt, they are linguistically speaking very guilty at the same time. What a predicament!

Now back to making money …

Since I am not a linguist, I won’t check every language out there, but let’s quickly check how the French are doing in regards to making money. They use the verb “gagner” which has the same origin as the English word “gain” (“gagner” also translates to “to win”). I therefore think the French are okay.
And the Spanish speaking people? Same story, they use “ganar”, which is used in “ganar dinero” (= making dinner, er, making money :-D), and also means “to win”.

But in German, it gets even worse. I should mention that we have a German expression, “Geldmacherei”, which is verbatim for “money making”. It is used colloquially and has depreciative connotation, more like making a quick buck by scamming other people.

Germans prefer to make a fortune #

There is a way to get out of this: Germans can make a fortune, fortunately. The German expression is “ein Vermögen machen”.

That’s solid, so I will go with that.

What I don’t do – acts of omission

Meeting new people, we often ask, “What are you actually doing?” I, for one, am beginning to realize that this is the less important and interesting question to ask, or to answer. More could be said about what I don’t do – consciously... Continue →